Pictured is a large classroom on the top floor of one of the wings of Alumni Hall, some time after 1960. Notice the crumbling wall on the right. The upkeep and renovations required to keep Alumni Hall going have been an ongoing issue since the first renovations in the 1930s. As early as 1929, students were noticing how old Alumni Hall was, as an editorial in The Knox Student said “As we look at Alumni Hall today, and wonder when we’ll be getting new buildings, perhaps we do not realize the true significance of the old red landmark.” A 1949 memo to Trustees stated that “[$16,615.34] is obviously a considerable amount to spend on a building as old as Alumni Hall.” These issues only worsened as time went on and costs were climbing, which probably explains the bit of broken wall in the classroom. These issues, as well as expanded classroom space in other buildings on campus, eventually led to the decision to “mothball” Alumni Hall. Taken from the 1958 Gale, this shot shows students between classes, leaving Old Main and using the South Terrace entrance to the Hearth. The renovated Alumni Hall will have a terrace area on the south side as well.

After steel studs and foam insulation, drywall installation on the lower level of Alumni Hall.

Worker tosses an old brick to the ground, after removing it to repair damage to masonry walls.

If anyone remembers the “old” stairways in Alumni Hall — barely wide enough for two people to pass — these new stairways, shown here with temporary wood construction treads, will seem as wide as Main Street.

Steel hook on a construction crane frames the front door of Alumni Hall during renovation work. 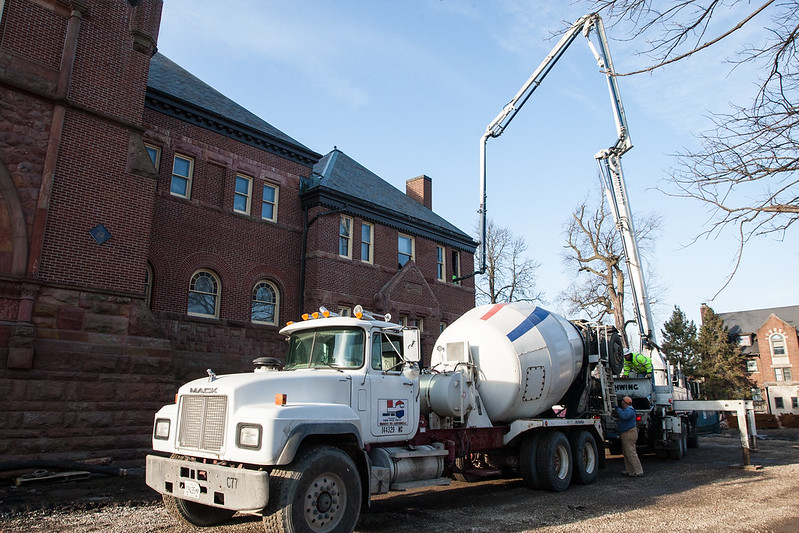 Delivery of concrete for interior floors: from the delivery truck, into a separate pump trailer, through hoses and into the building. Here is a student using the Computer Center that was once located in Alumni Hall’s basement. Does anyone recognize her?

The steel bracing that was removed from outside Alumni Hall is stored in an empty lot on campus.