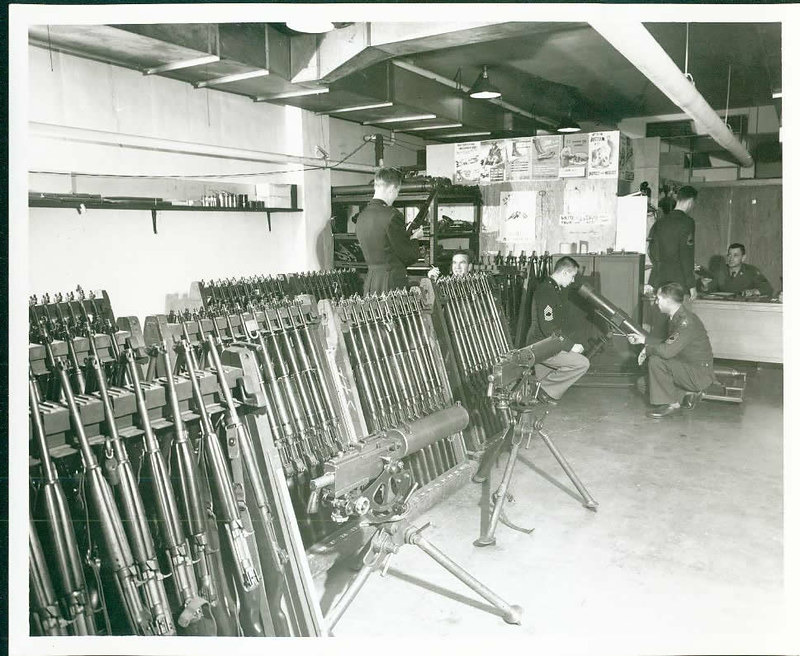 One of the most notorious uses of the basement was for a firing range. As students saw on our tour of the basement, there are still bullet holes that can be seen in the walls where the targets were placed. The rifle range is not the only part of Alumni Hall’s military history, though. Alumni Hall has served the campus during both World Wars as an important resource for soldiers.

From 1918 to 1919, during the first World War, the east wing was designated as the YMCA “Hut” under the direction of two secretaries appointed by the War Department. Classrooms that formerly served the Philosophy and Economics departments were transformed into lecture rooms for the 250-soldier unit at Knox. The 1920 Gale states that the Gale offices were turned into a canteen. The Hut served the campus for three months, and was especially useful as a clinic when the 1918 influenza pandemic hit campus. The Gale also recalls that a lot of entertainment took place at the Hut for soldiers: “Stunts were put on at the Hut at the regular times by men of the unit; boxing matches and sings were held; “World Forum” lectures were arranged for every Thursday night. The Hut was the best place at Knox for men of the unit to feel the Knox spirit, and the college atmosphere as it should be.”

Alumni Hall was also the home of Knox’s ROTC program until it was discontinued in 1990.