This shot from the Archives has two women perched on the steps on the south side of Alumni Hall. They appear to be doing some stitching: maybe a costume for a play in the theater? Back when the center hall served as a theatre, the Alumni Building entrance of Alumni Hall made sure playgoers knew where they were headed. The sign was changed once the theatre operations were transferred to the fine arts building upon its completion in the 1960s. 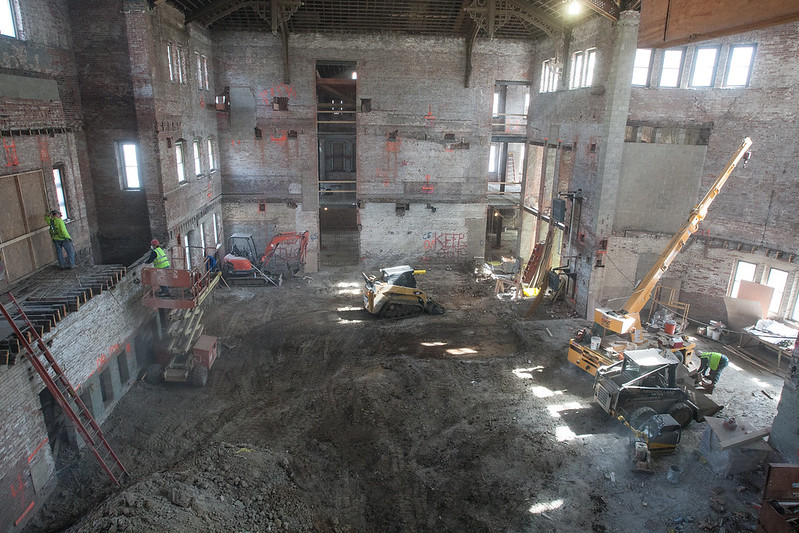 With the original wood floor, stage and balcony now entirely removed, foundation work continues in the central section that once used as an auditorium, later a library, a theatre, and finally offices; in the background, new steel floor panels are visible in one of the wings. 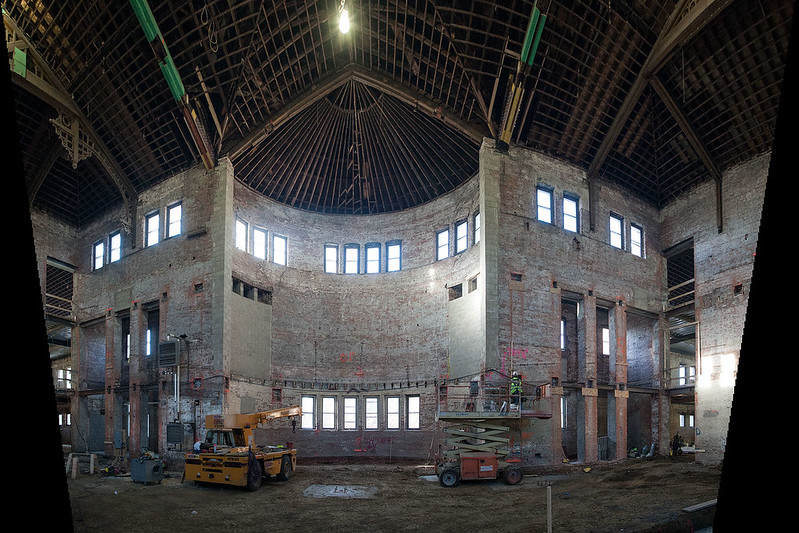 With the original floor removed, we can look all the way from the basement to the rafters in the central section of Alumni Hall. This view shows the curved south wall of what used to be an auditorium and theatre. On the other side of the wall is Seymour Union. This shot is from 1935, not too long after Alumni Hall’s central hall was converted into the College’s theater. These two students are working on a set for that year’s production of Peer Gynt. Student Howie Johnson is seen managing ticketing in the ticket booth for a Knox College stage production in the Alumni Hall theater in 1938. The theater had two ticket windows by the main entrance. Recent photos posted on this blog have been showing the dismantling of the balcony and ceiling in Alumni Hall — both essential parts of the building during its time as Knox’s theatre.

The same central part between the two literary society buildings that once served as a library was also the College’s theatre from 1928, when the library collection was moved to Seymour Library, until 1965, when the Ford Center for Fine Arts opened.

The photo above is of a play put on in 1930 called Tommy.

Once the books were removed, the seats were restored to the theatre. The floor had a capacity of 625 people, and the balcony held 225 people. The quiet library changed to a resonant theatre with the help of some new paint and acoustic tiles. A 1929 issue of The Knox Student reported on the space’s new “harmonious yellow tint” and “side lights of attractive decorative nature.”

Future renovations, mostly safety-based, took place later. The theatre was prone to fires, and there was a rewiring in 1948 and a major overhaul in 1963. A memo from 1962 reports a careless student lit some drapes on fire. And the memo writer was not pleased: “May I point out this is our second experience with a fire that could’ve been dangerous. The third time, we may not be so lucky.”

The 1963 renovation added a state-of-the-art light board, four dressing rooms, a sewing room, extra closet areas for costumes, a light room, and a makeup room, as well as fire-safety measures.

When the Center for Fine Arts was constructed, Harbach Theatre became the main stage for the College’s productions, although the stage and seating in Alumni Hall continued to be used as a general-purpose meeting area and alternate theatre.

The stars of the Alumni Hall stage were immortalized by the graffiti that each cast member left after a show along the inside walls of the theatre and on the ceiling above the catwalk. Graffiti left over the years can be seen in this video. As seen in recent construction update shots, the center hall of Alumni Hall is a large area with a stage and space for seats — an auditorium. It was originally intended to be a chapel, but over its tenure thus far, it has also been an auditorium, a theatre, and a library.

The original Knox College library was housed in Old Main, while Alumni Hall’s center hall was serving as a chapel. After Beecher Chapel was acquired by the school and the need for a larger library was realized, the books were moved to Alumni Hall in 1909.

The library featured not only books, but two large tapestries from the 1893 World’s Columbian Exposition in Chicago. They framed the stage, as seen in the photo below.

Flooring was laid down from the lobby to the stage to level out the slope intended for auditorium seating. Two staircases were installed to reach from the bottom floor to the top balcony where Dr. Elder, the librarian, had an office and additional stacks were housed.

The center hall of Alumni Hall remained this way until the completion of Seymour Library, which still houses Knox’s collection of books and library materials, in 1928.

As seen in the photo above, books lined the back walls of the lower level, and tables, chairs, and even statues decorated the area. It wasn’t intended to look makeshift, although it was a temporary solution. From the convincing looks of it, it probably fooled a few students between 1909 and 1928 who would’ve never known it was an auditorium space. Alumni Hall’s library viewed from the balcony, featuring tapestries from the 1893 World Exposition over the stage. In this artist’s rendering, you can see a view of the second floor of Alumni Hall looking south toward campus. As you enter the building from South Street,  the Mark and Jeannette Kleine Center for Community Service will be on the left  and the Gerald and Carol Vovis Center for Research and Advanced Study will be on the right. In the center of this floor will be an atrium opening to the third floor. This is where the theatre was previously located. To the left of the atrium will be the Admission Hospitality Room and staff offices. To the right will be the  Bastian Family Center for Career and Pre-Professional Development and Eleanor Stellyes Center for Global Studies. In a building as old and large and looming as Alumni Hall, ghost stories are bound to circulate. And, from what we know, spooky speculations have surrounded Alumni Hall since early in the building’s history. These ghostly rumors sparked certain student activities, like séances.

Spiritualism rose in popularity during the Civil War, and people’s interest in it continued until the late 1920s.

The giant theatre in the middle of the building, which at the time was being transitioned from the library to a performance theatre, had poor acoustics before a remodeling in the 1960s. The poor acoustics were what caused students to hear things, explains Lance Factor, George Appleton Lawrence Distinguished Service Professor of Philosophy and a campus expert on Alumni Hall as well as Old Main.

“If we were to spend some time sitting here in silence, we might share that experience. I don’t know what we’d hear,” Factor says, standing on the stage during a tour of the building this summer.

Factor shares the same view of Professor Raub, a professor of philosophy, physics and psychology from the early 20th century, who spoke out against the student séances. Their stance: There’s nothing there.

“[Professor Raub’s] remark was, ‘Why don’t they ever tell us what life is like on the other side? They never report,'” Factor said.

Students keep searching. Factor reports he has received requests for ghost tours of Old Main and the Old Jail.

“They’ve heard there’s haunts or spirits or whatever,” Factor said. “but I think the séances were more of a social experiment. It was trendy.”

Still, there are those among us who do get a little spooked by the empty building glowing at night and wonder about the many spirits who have come and gone in the 122-year history of Alumni Hall. To those folks, Happy Halloween!